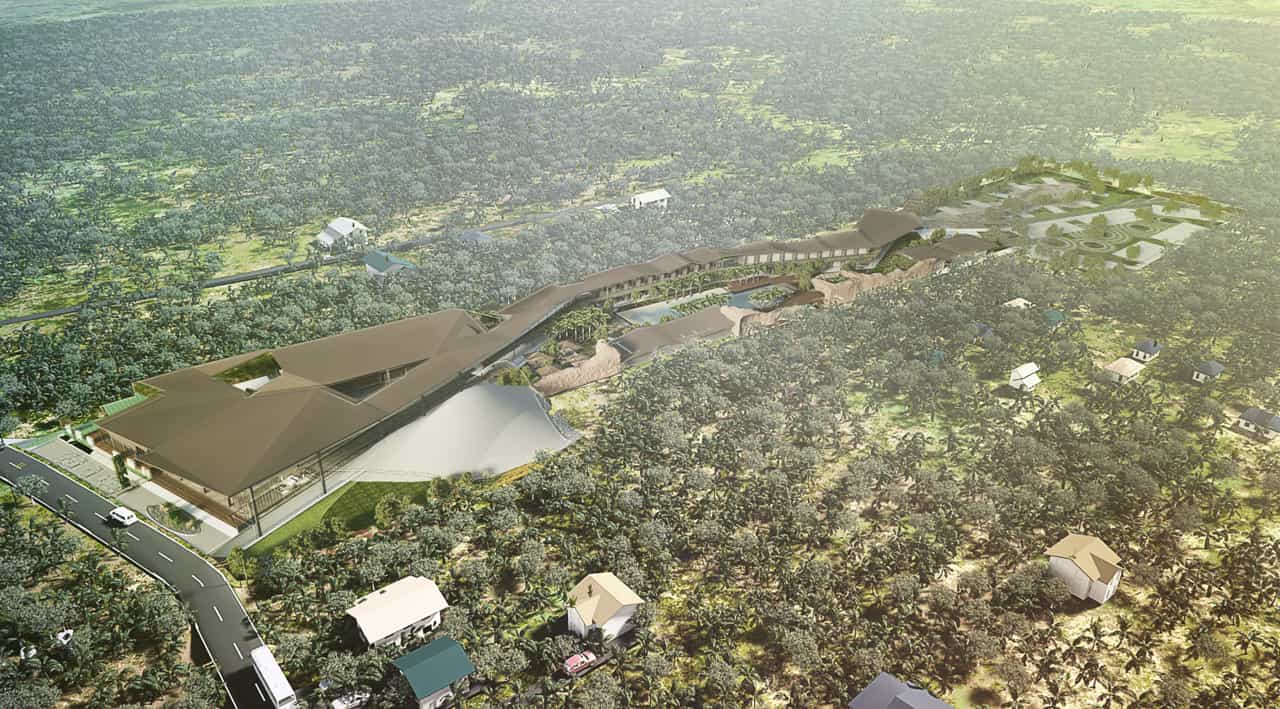 Located in Barangay San Jose, the site sits along a curve of Puerto Princesa North Road (National Highway). It is situated 7 kilometers north of Puerto Princesa International Airport and 2 hours away by land to Puerto Princesa Subterranean River National Park. Though relatively flat, the site’s frontage drops a couple of meters from the street. It is currently surrounded by low density residential areas. The nearest beach is approximately 2.5 kilometers away.

The peculiar location of the site for a resort hotel – as it lacks direct adjacency to the beach or any other spectacular natural feature – steered the design to creating an isolated environment for the program, taking advantage of the opportunity to compose a well-orchestrated sense of place – a hidden sanctuary, an unexplored place in an unexpected environment.

Holistically, it would feel like a carved hill. It would be fenced off by seemingly natural stone formations at its sides (at one side, the rooms become the fence). At the entry, however, there would be a void that would give a visual axis and would direct the flow and layout of the program. This void metaphorically would be the “carved-off” part of the hill.

Like a precious gem tucked inside stones, the architecture of the development embraces the “gem” – that is in fron of the house especially the guest rooms, the heart of the hotel. It exudes a language similar to that of the various monumental rock formations in Palawan carrying within them precious and rare materials. It is the surprise gem – the hidden sanctuary in an unexpected environment.

Contrasting elements are combined to add visual interest, such as mother of pearl or capiz shells inlaid in dark wood, as well as textural play seen in the usage of materials like woven abaca, cut stone, and in surfaces seen in uneven slats and pierced lattice screens. Light sculptures of metal links, local shell,and crystals embellish the lobby. Geometric patterns inspired by the architecture are incorporated in the different elements of design such as fabric, partitions, furniture forms, flooring patterns, and ceiling treatments.

Inspired by the same concept of precious gems tucked in stones, the interiors are done to showcase local materials and forms to exude a modern take on tropical design.

Taking inspiration from nature, earth tones and colors are integrated into the design as an accent. Green and brown runners cascade from pillows to bed covers that billow down to meet the warm, wooden floor of the guest rooms. Greens and browns make up for a soothing and calming combination for the restaurant and the function rooms as well.

Banaue Hotel
Situated in the heart of the world-famous millenia-dated Banaue Rice Terraces, and at 4,000 feet above the sea level, the...
READ MORE »

Chancellor Boracay
Drawing inspiration from the natural environment, borrowing colors and forms, translating it into elements of design which allows the subtle...
READ MORE »

The Summit Hotel
Strategically located on an elevated plane, the 6-Storey Robinson’s Summit Hotel will be a new destination for tourists and locals....
READ MORE »