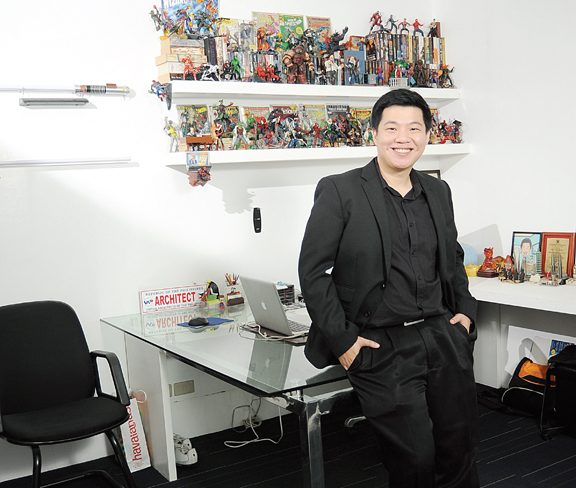 “Architect and urban planner William Ti Jr. describes Manila as one of the most beautiful cities in Asia.  “I have a special fondness for Manila.  It can stand out in Asia,” he says in an interview at Bizu Patisserie & Bistro in Makati City.

Ti, the principal architect of WTA Architecture and Design Studio, admires the layout of Binondo, Escolta, Intramuros, Rizal Park and Malate, which all thrive with culture and unique character. He believes in the capability of Manila and other dense cities to survive natural calamities and become sustainable.  The challenge, he says, is to build structures and spaces that are both useful and beautiful. Cities, he says, are more capable of withstanding natural calamities such as typhoons because of their heavy density.  “If development proceeds faster and becomes denser, you will have stronger protection against disasters,” he says.

Ti, who was born in Binondo, Manila, loves city-dwelling so much he dedicated his education and training for the improvement of his knowledge on urban architecture.  He finds Manila beautiful, although he says improvement is in order. He grew up in Binondo, where he played basketball in the street.  He developed interests in both arts and construction at an early age, something that would lead him to the path of architecture.  He used to teach calligraphy, Chinese visual art, among young children, while his family is engaged in hardware supplies.

He once dreamed of becoming a comic book artist and writer, as he is an avid collector of superhero toys, comic books, and fantasy novels. He still keeps sketching and illustrating to this day.

Ti obtained a degree in Architecture from the University of Sto. Tomas in 2002 and Master of Arts degree in Urban Design from the National University of Singapore in 2012. He placed 12th in the June 2003 Architecture board exam. Ti believes the density in high-rise structures may be more effective and more environment-friendly when done properly, as it requires fewer resources and less roads and resulting in less carbon footprint. He says architects, who combine the skills of engineers and artists, give structures a sense of character. “I like structures with a simple form and rich textures,” he says. “

The art of science

Architect’s Response to COVID Emergency
“As cities grew empty and hospitals reached full capacity, architects around the world pondered on their role in the fight...
Read More »

Daring By Design: Stories of courage and creative pursuits
” The first half of 2020 has been a rollercoaster of national and world events—from natural phenomena to global health...
Read More »