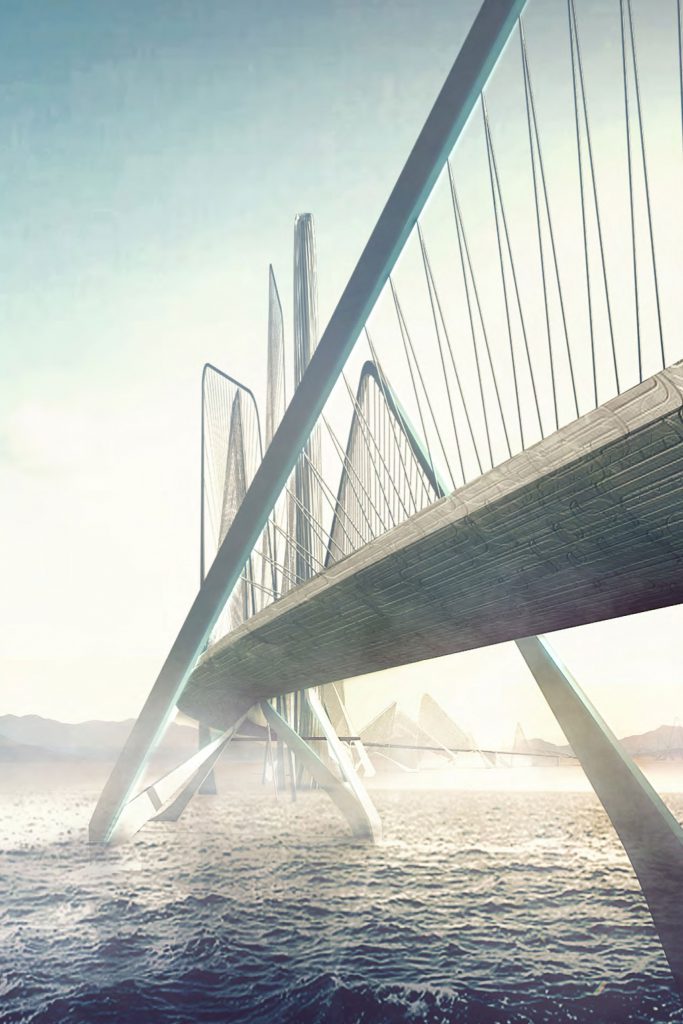 “Building sufficient housing in Manila is limited by available land to the north or south, and urban planners fear that the city’s constrained geography might lead to unaffordable housing. With a predicted doubling of the population by 2050, the pressures on the city (as well as the corresponding increase in commute times from the built-up urban poles) prompted WTA Architecture and Design Studio to propose a new piece of infrastructure that would allow easier and relatively quick access to satellite cities, thereby alleviating the pressures on metropolitan Manila while simultaneously confronting the population boom. In the project description below, submitted to our open call for “XXL” projects, Matthieu Begoghina of WTA explains the concept of the “Journey to the Bay” bridge:

“Journey by the Bay” was designed by WTA Architecture and Design Studio to propose a new approach to the development of the capital with the goal to start a discussion about the future of Manila and Luzon. Manila is known for different reasons, but the ones that the majority shares are negative. Vast areas of informal settlements, an inefficient public transportation system, vulnerability to natural disasters, and the legendary traffic congestion are part of the problems the Government tackled but wasn’t able to solve. Considering that the projected population of Metro Manila is expected to almost double by 2050 and that the historical urban growth of Metro Manila is averaging 800% every 50 years, the architects of WTA Architecture and Design Studio think that constraining the development of the city along the North and South inhibits the future development of the capital.

Based on the Dream Plan and on the study of other cities around the world like San Francisco, Journey by the Bay envisions the future of the capital around Manila Bay. This proposal develops a backbone of transportation that would be composed of a highway and a High Speed Train. This would closely connect the different cities around the Bay (Manila, the new Airport, Naic, Corregidor, Balanga, Hermosa and Malolos) with the loop taking only one hour. By creating a direct link between Bataan and Cavite, the highway would be the perfect opportunity to create a bypass connecting North and South while avoiding Manila.”

Learn more about Journey by the Bay

The Book Stop: a pop-up library for all
“With the present dearth of libraries, the WTA Architecture + Design Studio led by principal architect William Ti Jr. has...
Read More »

William Ti talks about Experiential Luxury
For WTA principal architect William Ti, Jr., luxury is about removing barriers and other hindrances to being one’s best self, of...
Read More »